In order to check the condition of the floor pan, I had to strip as much of the interior out as possible.  This included the seats, carpets and lower dashboard plastics.  This also meant I could give the interior a good clean whilst it’s out of the car, which isn’t always possible when it’s all in situ.  The whole process took several days, mostly because Winter is approaching and there’s not much light to work with, but also because some tasks are not for a single person to carry out easily (getting the main carpet out being one of them).

I started by removing the seats.  They came out fairly easily with four bolts on each of the front seats.  The rear bench came out by first pulling the loops underneath the cushion and pulling the whole thing forwards and upwards, ensuring the central belt and buckles were pulled from their slots.  After that, I removed the leather side bolsters by undoing the bolt at the bottom of each side and pulling them out.  Finally the hinges for the backrests were removed, completing the entire seat removal process. 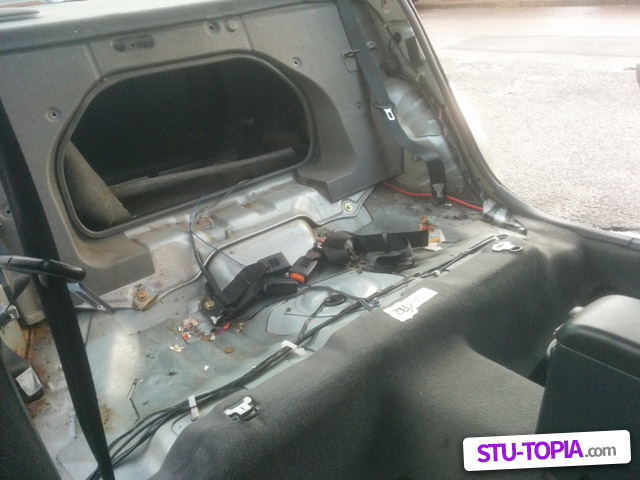 With the rear bench removed I spotted the first patch of rust, right where the offside rear arch meets the floor.  It’s also where the lower seatbelt anchor bolt sits, so this certainly needs to be dealt with before the car goes back together.  The metal seems strong, so hopefully it’ll just be a case of grinding it back and treating it.  I’m not sure where it came from, but I’d guess it was possibly due to water ingress from the wheel arch.  I won’t know until I can get underneath the car and check it from the other side. 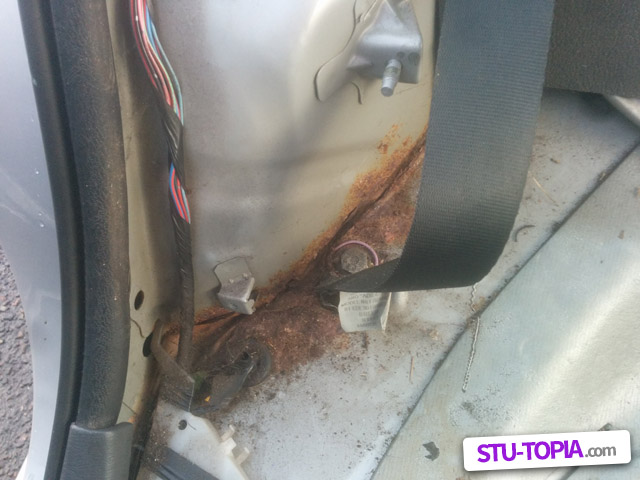 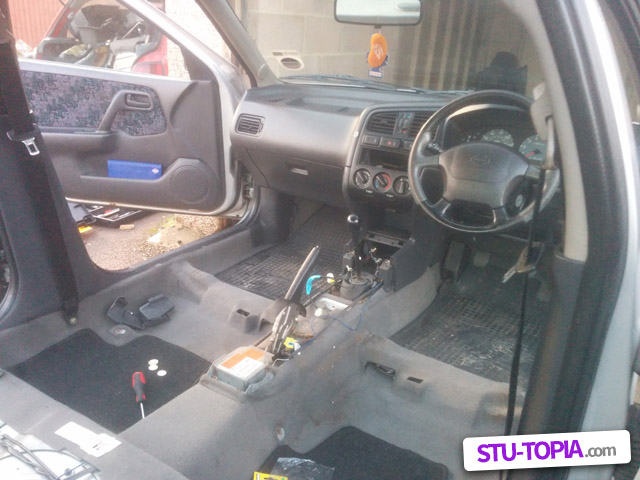 The part I was trying to free was in front of the gear stick, right where it meets the centre console.  It contains a a little illuminated shelf with a rubber mat for keeping your phone or loose change in, and it seemed to be connected to a daisy chain of other pieces.  I had to remove the centre console itself (where the radio and fan controls are situated), the glove box, the gauge cluster surround, the gauge cluster itself, and a load of other bits, just to get to that one part.  Eventually though, I finally freed it.  This is the mess I left behind: 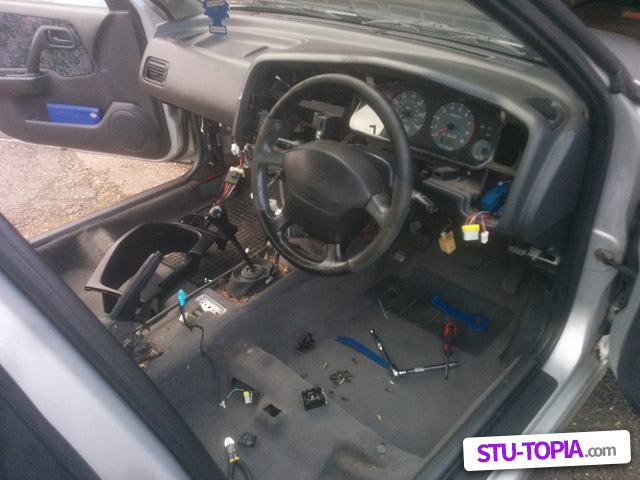 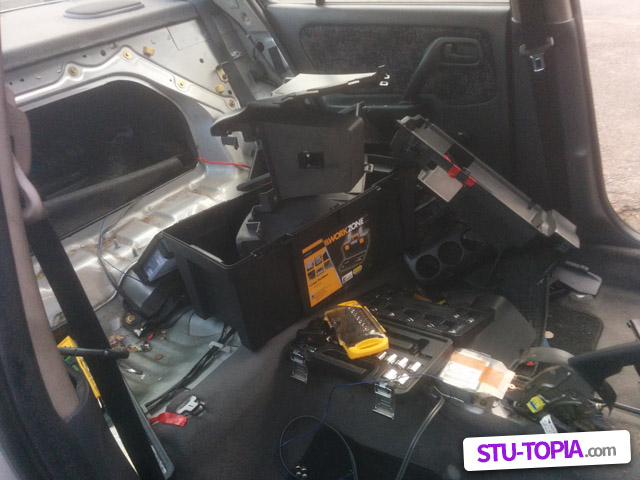 Now that the dashboard was out of the way, I was able to get to the carpet.  This was fairly straightforward, but time consuming with only one person.  I started by unclipping the plastic rails that protect the lower door seals (I put them back afterwards to keep the seals protected), and then disconnecting the tabs along the sill on each side.  I had to undo the lower anchor bolts for the front seatbelts as these go through the carpet, but I could have gotten away with just cutting a slit in the carpet instead.  I did have to cut one or two parts of the carpet to clear the centre console framework.  These parts are covered by the gear surround anyway, so it won’t be noticed.  I also had to remove the ECU because this was bolted on top of the carpet, and also unplug the airbag control unit behind the handbrake so that the cable could be threaded through.  I disconnected the battery before doing this, in case unplugging things caused lights to appear on the dash when reconnected.  Finally the carpet came out.  You can see in the image below where I had to cut, particularly towards the lower half of the carpet. 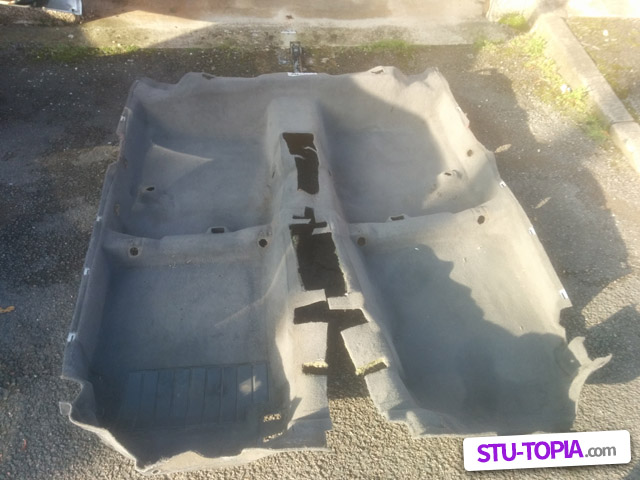 With the carpet removed, I can now inspect the condition of the floor pan entirely.  Luckily it’s not too bad, but I’ll need to get a vacuum cleaner in there and remove the 16 years of mess that’s accumulated underneath. 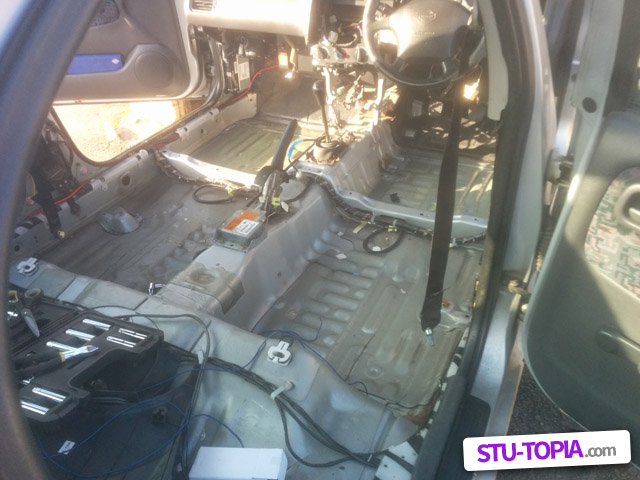 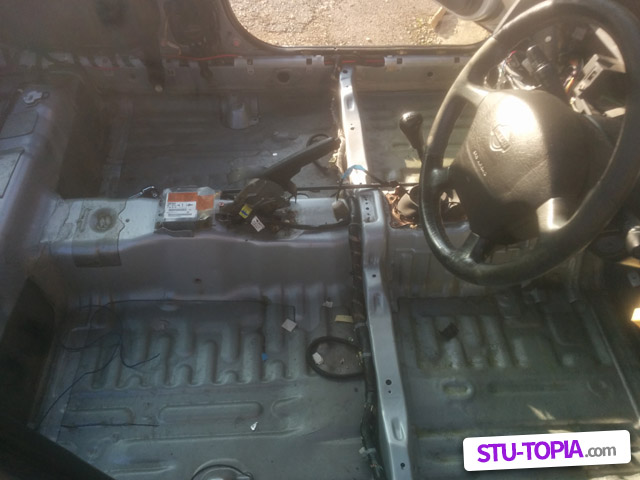 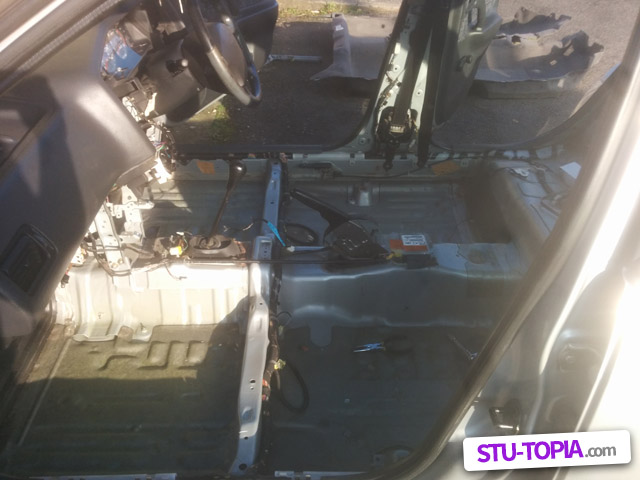 I had already stripped out the boot previously, after finding some damp patches on the carpets.  Expecting the find a pool of water in the spare wheel well, I was relieved to find only a small amount of moisture, but this was enough to cause some slight rust around the drain plug.  I suspect there’s a leak in the boot somewhere, but so far I haven’t been able to see where it’s come from.  Possible sources are the tail cluster seals and the boot spoiler holes.  The boot floor carpet is totally damp and needs to be replaced, and the side carpets are dirty but might be salvageable. 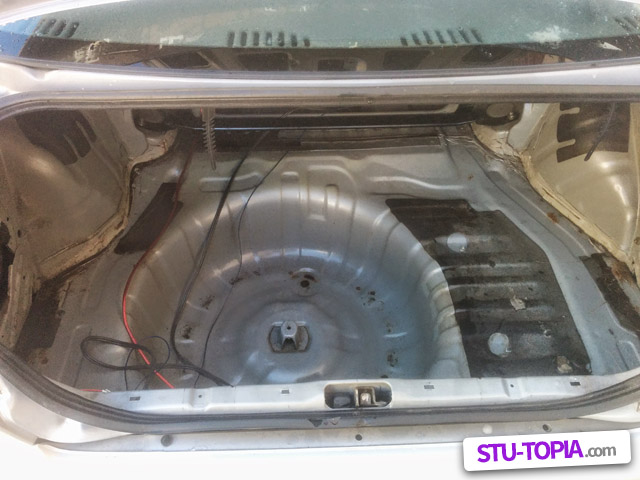 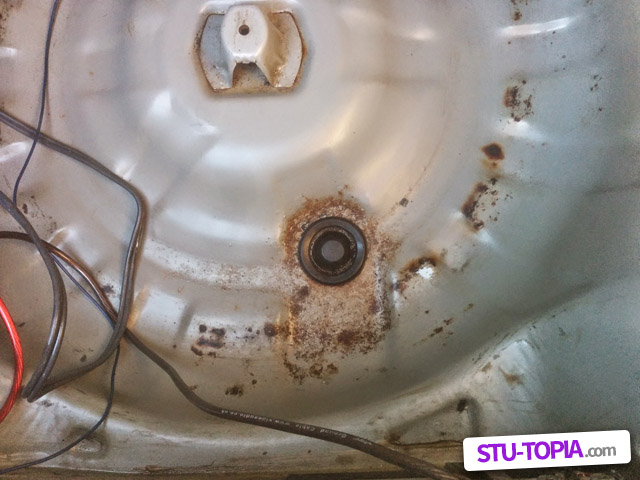 After everything was removed, I loaded it into the back of the Micra and headed to my storage unit.  Total number of trips came to three. 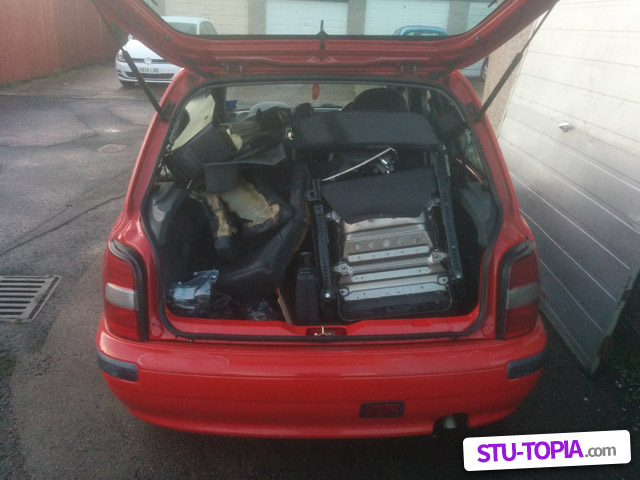